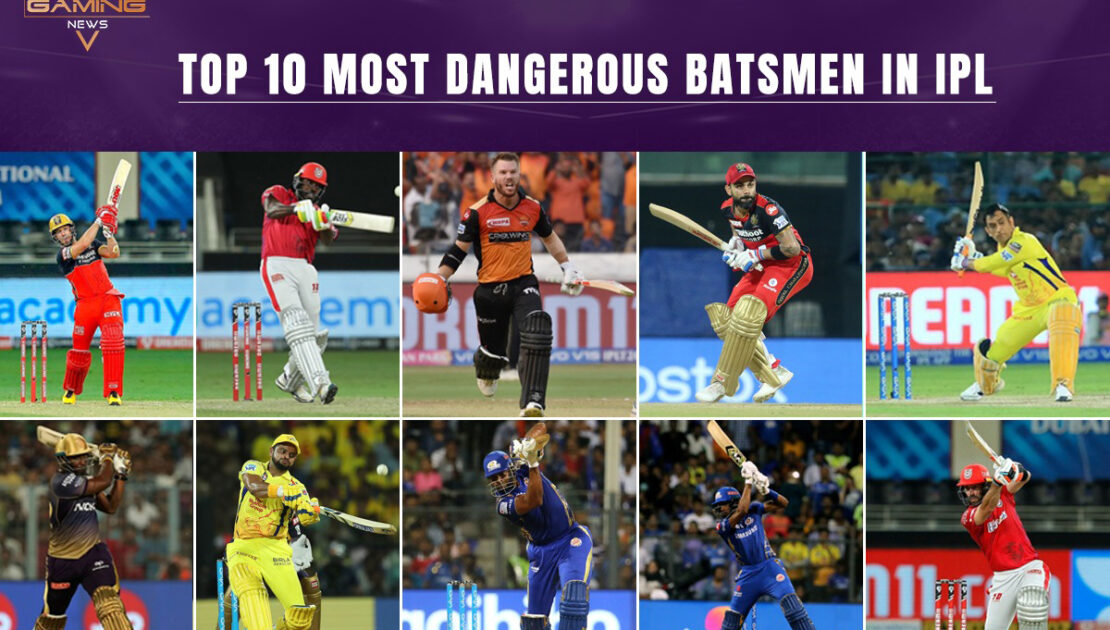 TOP 10 MOST DANGEROUS BATSMAN IN IPL

Top 10 Most Dangerous Batsman In IPL: IPL or the Indian Premier League is one of the most celebrated Cricket festivals in India. All the pioneers of the cricket field, the best batsman, and the best bowlers came together to form teams to play with and against each other. The format of the game doesn’t support batsmen who would stick on the ground for a longer period and deliver lesser runs, the game is not for the steady batsman. Moreover, IPL is very much celebrated among youth and adults because of having so many edgy batsmen who can gear up themselves right when they come onto the ground. Here, we will see the top 10 most dangerous batsman in IPL.

He is one of the most famous players of the IPL. The former South African batsman playing from the side of Royal Challengers Bangalore can get on the nerves of the bowlers very bad right from getting his first strike on the ground.

Gayle, the threatening opener for West Indies is a living nightmare for the bowlers of the team in opposition. He is one of the most Lethal openers in the history of IPL. Chris Gayle has so many outrageous records some of which are the highest ever scored in an innings of the history of IPL.

David Warner is a must to have among the top 10 most dangerous players of IPL. He has a tremendous record of 44 fifties and 4 hundred with a strike rate of 142.09. He is also well known as the synonym of destruction. Whenever a list of top-performing dangerous batsmen of the IPL would be made, Warner will hold a position.

Kohli has to be among one of the most striking batsman of IPL. He is probably the most furious and dangerous one. His powerful execution of the game and his outstanding performance sets the team towards winning all the time. The stats are always screaming high in records for him. His destructive and Furious batting skills make him the most dangerous batsman in IPL

Dhoni, is indeed the most incredibly dangerous batsman in IPL league. The Former captain of the Indian cricket team is a terrific team player; a terrific captain. Having him in any team would automatically drag so much attention to it. Dhoni has scored over 300 runs in almost all seasons of the IPL and after his comeback in the year 2018, Dhoni lashed out to his opponents with an average of 75.

Russell, the batsman who played formerly for Delhi Daredevils in 2012 now playing for Kolkata Knight Riders in the Indian Premier League is indeed one of the most dangerous batsman in IPL. He has exceptionally well skills for a Limited innings match. In his career of 74 IPL matches a year in the career of 74 matches Russell has given 1517 runs and has code 8 half-centuries 105 4s and 129 6s.

Raina has been an inherent part of Chennai Super Kings and his good inline cricket makes him must count among the top 10 most dangerous batsman in IPL. With a strike rate of 137.1 4 runs, Raina comes in second place for scoring highest in the history of IPL. He is also among one of the players who has played the highest number of matches with IPL.

Pandya, the very dynamic, the very vigorously powerful Player of the Indian Cricket Team who also plays for Mumbai Indians is definitely among the most groundbreaking batsman in IPL. Pandya has very amazingly transformed himself into a high spirit player.

Maxwell is a big name in the Indian Premier League. Maxwell who was formerly playing on behalf of RCB, now playing for Kings XI Punjab has displayed his unique performance and has played tremendously well in all seasons of IPL starting from 2014. In his career of 82 matches with IPL Maxwell has delivered 1505 runs with a strike rate of 154.67.

Last but not least Kieron Pollard makes an important name among the top 10 dangerous batsman in IPL. Pollard has delivered a strike rate of 178.71.