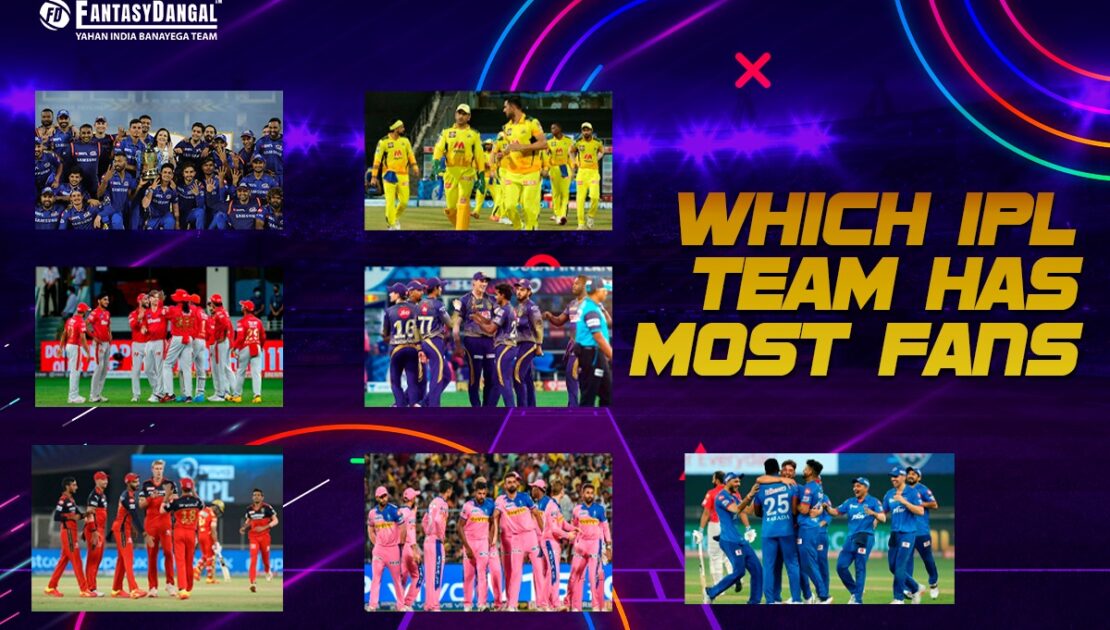 Which IPL team has most fans

Which IPL team has most fans: IPL is not just a game but a worship for fans in India. Whenever these games start, the hearts of the fans are full of enthusiasm. Though the Covid-19 affected this year’s series, the enthusiasm and love among fans remained unaffected.

What do you mean by the Indian Premier League?

IPL was founded by the BCCI (Board of Control for Cricket in India) in 2007 India. It is also popular as a professional T20 team. Eight different teams play in the cricket battle. Cricketers from different countries participate in the teams.

Recently we have enjoyed the successful 13th IPL edition and the biggest role played in making this series a huge success is of its fans. “Which IPL team has most fans” becomes the most searched keywords during IPL. The performance of an IPL team also depends on the motivational behavior of fans.

Decision on which IPL team has most fans is taken by considering numerous factors. Some of the major factors that make an IPL team popular include:Performance of the team in last two or three matches

New signature and many more

After we gather this information, we start supporting a particular team. According to a survey, fans can raise the standard of any IPL team magically. They become strong pillars to strengthen their team.

This question belongs to every IPL lover’s mind that which IPL team has most fans. To get the answer we must go throw the social media popularity status of all IPL teams. Let’s first know something about all Indian Premier League teams:

Teams of Indian Premier League with their fans status:

Royal challengers: This team belongs to Bangalore city. For now, there are 22 players available in this IPL team. Recently, 5 domestic, and 3 foreign players have joined the team of Royal challengers.

Fans Status: Royal Challengers team holds the fourth position with 3.8 million fans. 100 Millian followers belong to Virat Kohli, who is a superstar in the cricket world.

Fans Status: You must be knowing the popularity level of Mahendra Singh Dhoni. His name with the team is enough to increase the fans list. CSK team was suspended for two years. Still, the fan following remained the same. Now, yellow jerseys are winning many hearts with a count of approx 6.0 million fans on Twitter. When checking which IPL team has most fans, CSK stands on top of the list.

Mumbai Indians: This team belongs to Mumbai. Rohit Sharma, Hardik Pandya, and Krunal Pandya are the most popular Indian players of Mumbai Indians. Some foreign players also play in this team to grab more popularity and increase the fans list.

Fans status: Mumbai Indians won the game by 5 wickets in the year 2020. But they are still trying to beat the fan following of Chennai Super Kings. Their followers have reached a big score of 5.8 million. Their position on the follower’s board is second, which is also not bad.

Fans status: This team has many young names. Earlier the name of the DCS team was Delhi Dare Devils. In the future also there are chances that the team will get a new name on the jersey. “Which IPL team has most fans” The following is not that good. 1.5 Millian Twitter followers are currently supporting DCS.

Punjab Lions Squad: Beautiful actress Preity Zinta has supported this team for fourteen years as a co-owner. As per recent updates, the wow factor is missing from the management side. But as they have picked in three more x-factors in their team, it can even affect the fan list of Punjab Lion Squad.

Fans Status: All teams are working so well to get the best social response. Knowing the popularity status of IPL teams is always entertaining. A strong comeback from Punjab Lions Squad is expected. It has 2.1 million followers as per current twitter records.

Kolkata Night Riders: As the name reflects, T20 players represent Kolkata city. Pat Cummins, Kuldeep Yadav, Sunil Narine, Andre Russell, Dinesh Karthik, and Nitish Rana are the most famous names of the team. “Which IPL team has most fans” Recent addition and auction were quite challenging for other teams.

Fans status: KNR is the team of Sharukh Khan with a fan following of 4.1 million people.

Rajasthan Royals: The popularity of this team is getting heights of success. In IPL 2021, player Chris Morris made history. Morris was sold to Royals at Rs. 16.25 Crores. This most expensive buy has made an indelible mark and becomes headlines of the news.

Fans Status: Rajasthan Royals didn’t perform well in the last few games. They are even losing their popularity and followers both. At present, they stand at the last position with the lowest fans number of just 1.2 million followers.

Sunrisers Hyderabad (SRH): This team represents Hyderabad, Telangana. Traver Bayliss is the coach, and Kame Williamson is the captain of this team. There are 25 players on the entire team. The most expensive auctions were for David Warner, Manish Pandey, Rashid Khan, and Shahbaz Nadeem.

Some of the followers choose a team as they like a particular player, coach, or co-owner while others just check which IPL team has most fans and start following the one with the highest number of followers.

So be the real supporter of your team and enjoy the most entertaining IPL cricket on Fantasy Cricket Games.

Read More About: Most Dangerous Team in IPL